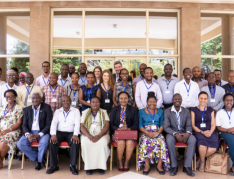 Published: JANUARY 01, 2021
Climate Action Network Tanzania (CAN TZ) hosted a Pre-COP25 on the 15th of October which was followed up by the climate financing workshop the next day. It was the first Pre-COP ever held in Tanzania. 48 climate experts came together at the Landmark Mbezi Hotel and Conference Center in Mbezi Beach, Dar es Salaam. The aim of this year’s conference was to strengthen the bonds within the African continent and to prepare best for the negotiations at the COP25 2019 in Spain. The participants came from all across Tanzania as well as from Ethiopia and Kenya to attend this important conference. Dr. Sixbert Mwanga, the executive director of CAN TZ opened the Pre-COP25 by stressing the importance of a strong African representation at the COP25 to ensure fruitful negotiations. He called for more accountability towards climate change, especially from those countries that emit a particularly large volume of emissions. An academic perspective on current scientific climate change findings was presented by Dr. Catherine Massao, a lecturer at the University of Dar es Salaam. Climate change is without a doubt an issue our planet suffers from heavily and its consequences can already be felt. She referred to unusual amounts of rainfalls in Dar es Salaam every year. Localized flooding causes huge losses in the economy. Furthermore, she mentioned the effects of the changing climate in various socio-economic sectors, especially in sub-Saharan Africa, as many people’s livelihoods are dependent on small-scale agriculture which is linked to the climate: large droughts, floods and rising temperatures challenge Tanzania’s economy and leave a financial gap of yearly several billion USD to cover loss and damages. Dr. Massao highlighted the coverage of loss and damage as it should be the main focus of the COP25. During the UN Climate Conference in Madrid, information gaps have to be addressed and financial support towards the climate-vulnerable countries is expected. Risk insurances, financial tracking systems and the engagement of multilateral development banks can be seen as approaches to tackle financial burden for poor countries. Although she mentioned the necessity of more discussion regarding these financial support mechanisms. At the end of her speech, she concluded with a comment on the Tanzanian climate policy as there is a need for an improvement of prioritizing, communication, research and investment regarding the future implementation of the international climate change policies. For a better understanding of the construct of annual COPs, German consultant Thomas Hirsch, founding director of Climate and Development Advice Consultancy, presented an insight into the structure and content of this multi-layer conference. Moreover, he introduced scientific climate change basics by stressing the IPCC 1.5 C report and its key message. The 1,5°C limit should by any circumstances not be exceeded as this would trigger a climate disaster. Subsequently he then stated scientific prognosis to back this thesis. The climate change rulebook which was passed around in this conference is a good starting point, but ambitious targets have to be set as well, according to Thomas Hirsch. His presentation stated clearly that the changing climate effects, especially for climate-vulnerable countries in Africa, must be addressed with urgency without postponement. 2030 is the deadline to prevent a global climate catastrophe, he warned. The COP25 is the springboard to the COP26, which will be the ultimate test for the Paris Agreement. Referring to Hirsch’s arguments, Mohamed Adow spoke about the African perspective and objectives of COP25. His five main topics that should be addressed in December are: NDC enhancement, finalization of rules, the foundation of science and equity, impacts and enabling along with support. Africa can already record benchmarks of success. Now it is important to maintain the pressure and hold countries accountable. Africa needs to display strong solidarity, he continued. Another focal point of his presentation was the matter of loss and damage at COP25 as financial backings have to be finalized. Adow differentiated between the positions in the global climate change debate as it is important to note that economically developed countries emit most CO2 and sometimes even block mitigation and adaptation processes. Followed by Mohammed Adow, CANTZ TZ team member Tondelo Vitus, presented his research results on “Addressing climate-induced loss and damage – study findings from Bagamoyo and Pangani, Tanzania”. He introduced the topic by explaining the background of “Loss and Damage” and its placement in the UNFCCC context as they established the Warsaw International Mechanism for dealing with climate-induced Loss and Damage. The objective of this study was the documentation of Loss and Damage in these coastal areas. Key findings can be divided into sectors: one of them deals with climatic stressors, such as rising temperatures, diseases increase and floods related to heavy rains. Vitus gave several recommendations which e.g. include a coastal management policy, improved social services and climate insurances. Furthermore, he mentioned that Loss and Damage research needs to be upscaled as lacking information and scientific data is a huge disadvantage regarding climate financing. A final plenary discussion as a recap comprised all insights, questions and conflicts. The involvement and awareness of the government seems to be the greatest issue. A fruitful discussion on how to inform and educate the government took place. One of the concluding arguments was that there is a lack of capacities as well as of the implementation of strong policies. Capacity building is needed in rural and urban Tanzania. Ethiopian climate expert Samuel Abera reported that 94% of its country’s energy need is covered by renewable energy which shows future opportunities for Africa, which are less cost-intensive in the long run. The participants came to the conclusion that global mitigation and adaptation have to be balanced while for Tanzania adaptation remains the main focus. The country itself is not a huge emission producer yet but has to be careful by limiting its emissions as there is an urge for industrial development. The implementation is not only cheaper and convenient, but also more accessible to off-grid areas. Renewable energy provides employment, contributes to climate action and gender mainstreaming as well as it reduces harvest loss.