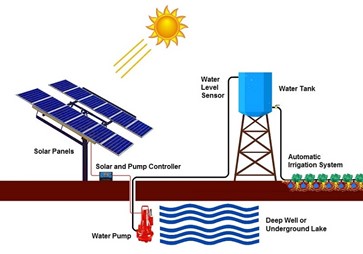 The food vulnerability assessment due to Climate Change in Hai District by Lema et al., 2014 indicated that severe droughts have dramatically affected agriculture production and food security in the area. Climate change has exacerbated water stresses for different socio-economic activities of most communities in Tanzania including Hai District. It has  disproportionately affected traditional irrigation agriculture practices that utilize water from river diversions or natural springs. Traditional irrigation has historically been a major means of ensuring food security and income to the majority of farmers in Hai DC. However, the situation has changed significantly in recent years whereby farmers in the project areas are no longer able to rely on traditional irrigation schemes except during the during rainy seasons only. This is largely due to changes on rainfall patterns which has become  and unreliable thereby making it impossible for rivers and streams to flow continuously throughout the year to rain dependent farming activities. Coupled with the geographical location of the project areas which is characterized by low rainfall  (i.e., < 700mm annually), the area has recently been experiencing prolonged dry spells, leading to limited access to water for crops, livestock and human consumption. Using limited and unreliable water from natural springs these poor smallholders’ farmers currently receives water twice a week for both irrigation and drinking of their livestock, a situation which is significantly impeding their development prospects. The changes have also caused  recurrent crops failure and death of livestock In turn, this situation has triggered  fears of realizing most targets under the sustainable development goals including food insecurity, famine, and perpetuation of poverty, inequality and social conflicts among smallholder farmers (e.g., especially between farmers and pastoralists).Intrigued by these concerns and the inspiration of it’s Think and Do Tank philosophy, CAN Tanzania is championing a 18-months project titled “Enhancing the role of Solar Irrigation for Poverty Reduction in Hai District”. Funded by the Germany government through the Federal Ministry for Economic Cooperation and Development (BMZ), this project aims at enhancing the resilience of 1200 small holder farmers households in the area against climate change. The project is implemented in  three villages of Ngosero, Kilima Mbogo, and Mkombozi which are located in the dry lowland plains of the southern part of Mt. Kilimanjaro.

By using pro-poor, human-centered and participatory approaches, the project seeks to overcome the pervasive challenges of poverty, food insecurity, gender inequality and water use conflicts caused by the growing lack of access to reliable and affordable water supply for irrigation purposes as compounded by the population growth in the area as well as the growing impacts of climate change. To ensure the project implementation aligns with local structures and other circumstances in terms of needs and priorities, CAN Tanzania conducted during the initiation phase a comprehensive socio-economic baseline and hydrogeological studies in the target villages. The results of these studies have been promising. They demonstrated  the villages have enough fertile land and ground water for both domestic and commercial agricultural production.. Based on these findings, the project has been designed to use reliable and affordable solar powered water pumps to generate water for both irrigation and domestic use. On irrigation, the generated water is expected to be sufficient for irrigation of  6000 acres of agricultural land. In addition to boreholes, the project is also establishing charco dams to supplement boreholes by harvesting rainwater from surface runoff during rainy season.  Using an integrated and holistic approach, the project is also addressing related challenges for these farmers including training on modern farming and climate resilient techniques, bookkeeping and financial management. The project is also encouraging farmers to make use of digital platforms to access all key information such as markets and climate services from various online sources such as the TMA farm SMS program.

Based on these interventions, it is expected that this project will transform these smallholders into a resilient and vibrant communities capable of coping with the present and projected shocks from climate change and other socio-economic and ecological stressors.